So-called mesh networks are the latest fashion in home networking. Instead of relying on one router to provide a strong, fast Wi-Fi signal throughout your home, mesh networks use multiple access points and a few nifty tricks besides. BT’s Whole Home Wi-Fi is the latest mesh networking kit, and here’s our review. (See also: Best routers)

Note: Unlike BT’s routers, the Whole Home Wi-Fi will work with any router and with and ISP since it isn’t a router itself: it just replaces you’re existing Wi-Fi network.

You can buy the Whole Home Wi-Fi for £249 from Maplin or from BT directly for £299. That’s quite a lot, but for this you get three ‘discs’ which you can place around your home to get the best coverage.

Other similar kits we’ve seen contain only two modules, and you have to pay for extra units if you need more. The Netgear Orbi, for example, costs £370.

Unlike Netgear’s system which limits Wi-Fi devices to using only the 2.4GHz band, BT’s Whole Home Wi-Fi works on both 2.4GHz or 5GHz.

This is much like most modern dual-band routers, but as with BT’s Home Hub router, the Whole Home Wi-Fi provides only one network name so you can’t manually connect to the 5GHz or 2.4GHz part.

The discs don’t replace your router, just the Wi-Fi element. Each disc is essentially a 802.11ac router with 4×4 MIMO and communicates with the other discs to – in BT’s words – create an intelligent, self-configuring network.

First you should download the free BT WholeHome app which is available for Android and iPhone. This guides you through the whole process and also gives you some management controls once it’s set up.

It doesn’t take too long. You connect the first disc with the included cable to a free Ethernet port on your router. It also needs a mains socket as it requires a power brick just like your router.

The app then guides you through positioning the second disc, by first checking the signal strength from the first disc to your phone in the potential site. If you get a ‘good’ or ‘excellent’ result, you can power up the second disc. If it’s too close or too far, you should find a more appropriate location. 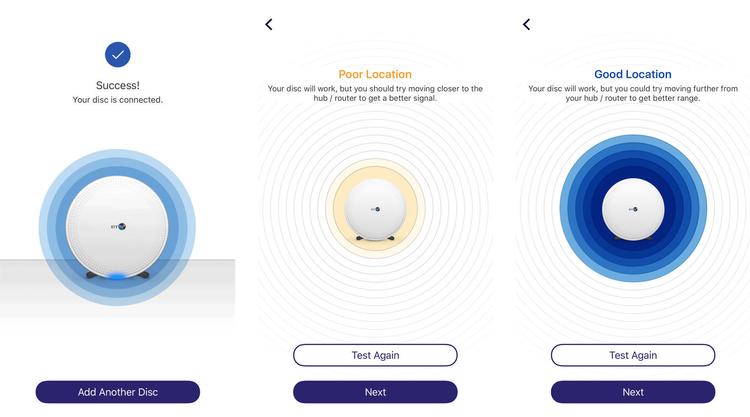 It’s the same process with the final disc, but we found that instead of measuring the signal strength between the second disc and our phone, the app actually tests the signal back to the first disc and – in a loft room (with the router on the ground floor) it told us to move closer to the router.

This seems counterintuitive, but BT assures us that if one disc is placed on each floor of a three-storey home the discs will all communicate with each other to ensure the best signal.

In the event, the disc in the loft room did establish a connection and the blue LED lit up.

The final stage is to connect each of your devices to the new network: there’s a removable plastic card with the name and password on each disc. The app then recommends selecting your old Wi-Fi network on your phone and tapping the ‘Forget this network’ option to prevent it from re-connecting to the router’s Wi-Fi.

To us, this seems bizarre as it’s simpler to disable the router’s Wi-Fi. And doing this means the old Wi-Fi isn’t trying to compete with the new on the same frequencies. 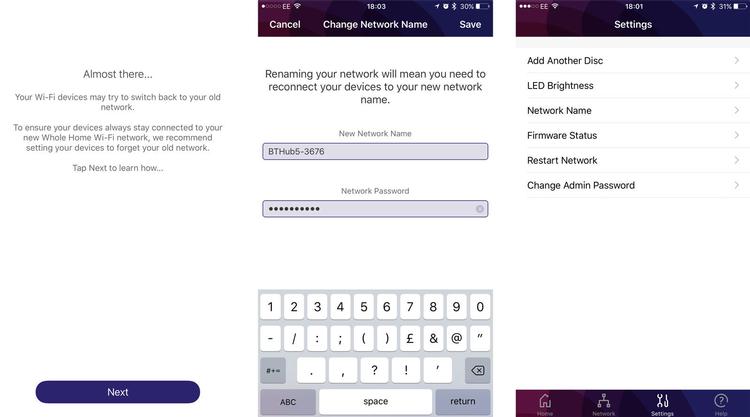 In the app you can see which devices are connected to which disc and on which frequency. Most people won’t bother to look at this, but it was interesting to watch how quickly phones and tablets switched to a new disc when you take them into a different room. Sometimes it’s within a minute, and at other times they remain connected to the previous disc for a long while.

The app also gives you a button to update the firmware on all discs and even a button to ‘pause’ the Wi-Fi which BT says could be useful if you want everyone to stop using their devices and come and get their dinner. Unlike Google’s Wifi (a very similar system which is only on sale in the US at the moment) you can’t pause the connection for specific devices or groups of devices. 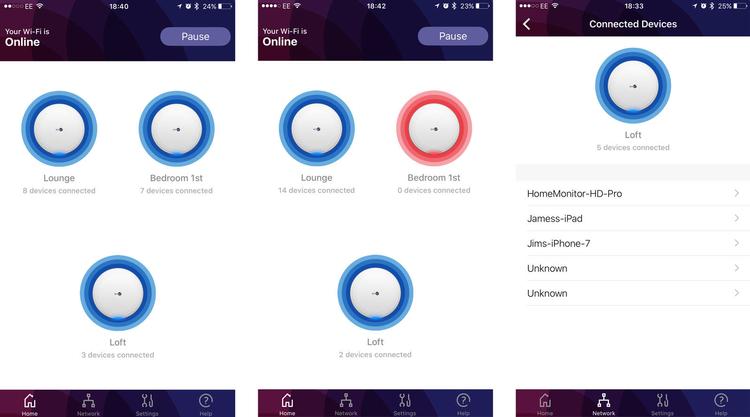 Perhaps the most useful is the ability to dim or turn off the discs’ LEDs completely, especially if one or more are in bedrooms.

You can use the app only when you’re connected to the Whole Home Wi-Fi as it won’t work remotely across the internet.

The aim of the Whole Home Wi-Fi is the same as any other mesh network: to provide a good internet connection in all corners of your home. But as homes in the UK can vary from really rather small to very large, and their construction from plasterboard internal walls to thick stone walls, it’s impossible for us to say if it succeeds in its aim.

We tested in a typical semi-detached property with a loft conversion, with the router placed at the front of the house on the ground floor.

Prior to installing BT’s Smart Hub, we’d always had trouble getting a strong signal in the loft. But with the Whole Home Wi-Fi attached to a Home Hub 5, this was completely cured.

In the lounge, just 2m from the primary disc, we recorded a transfer speed of 515Mb/s. Clearly that’s using 802.11ac, and it’s about the best real-world performance you’ll see at the moment.

Moving up to the loft room, two floors above, the speed dropped to roughly half this at 264Mb/s. That remained unchanged when we’d turned off the disc on the middle floor, indicating that the furthermost disc was communicating directly with the primary disc and not getting a boost from the middle one.

Using the Home Hub 5’s Wi-Fi we saw just 19.3Mb/s in the loft, so it’s a massive improvement. However, it’s not such a big boost over the Smart Hub, which managed an impressive 220Mb/s. And since it’s unlikely your broadband is faster than 150Mb/s you won’t notice an improvement in speed by installing the Whole Home Wi-Fi except on the odd occasion you need to transfer large files wirelessely within your home network.

Don’t forget that you can extend your Wi-Fi by using powerline network adaptors, and it’s well worth investigating these before investing in a mesh network system as you could save money.

The Whole Home Wi-Fi does a great job in an average UK home and should eliminate any deadspots. It should also speed up the connection at the farthest points from the router, enabling HD video streaming in places where before you may have had a very weak signal.
However, upgrading an older 802.11n router to the latest 802.11ac router could have a similar effect and save a lot of money in the process, especially if you’re getting that router – such as BT’s own Smart Hub – free from your ISP.